I know many are concerned about how I'm doing. For someone so used to blabbing to the world, it's strange that I feel nearly choked when I try to imagine a post on FB.

My mom died yesterday at 1:39 in the afternoon (her time). Almost everyone in her family and Dad's had been to see her in the previous 48 hours. Many were just outside the door. She was surrounded in the room by my brother and sister and my dad. They were holding her hands. I had spoken to her a couple of hours before, telling her I loved her, that she had raised us to be strong and to be strong for each other, that she could go because we were going to be OK. June asked me to tell her about Italy, so I rambled on for awhile about the lemon trees and the orange trees and the olives and the sea. Her breathing then was terrible to hear. Her body was too weak cough, liquid was filling her lungs. She didn't move. When June messaged me to call her later in the evening (I am seven hours ahead), I knew what I would hear.

I'm OK. I slept more deeply and long last night than I have since I left home. Grief doesn't wake me up ten times a night the way fear and anxiety did. I woke up this morning at 9 am to my brother Mark texting me (Viber) that he was finally going to try to sleep (2am CST). At our request, the hospice folks had come and cleared away the bed and the equipment and so the family had kept busy last night putting the house back together. Without her.

Here, I got up, dressed and cooked an egg and toast and ate standing at the window looking at the stone pines. I walked around the courtyard of the apartment complex and threw fallen oranges into the gorge behind. I wanted the tears to come. They didn't. 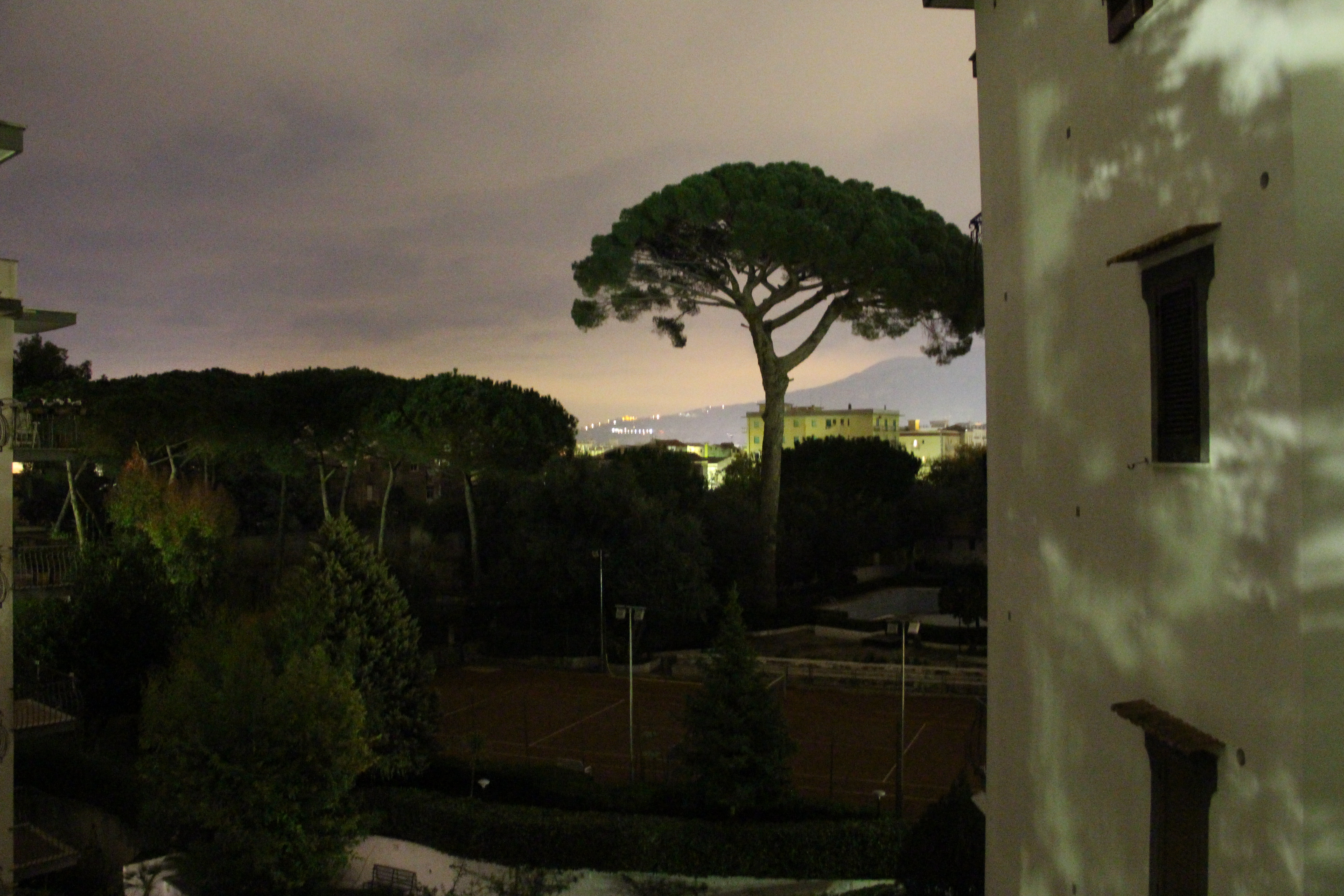 View from one terrace of the courtyard and Stone Pines (also called Umbrella Pines).

I walked down Via Degli Aranci, where I live, East about 3/4 mile to Corso Italia and had an espresso. I stopped in the Deco to buy chicken and pasta for dinner and more power converters (both of mine blew yesterday). In Piazza Tasso, packed with families and old couples strolling around in their Sunday clothes, drinking cappucino at sidewalk tables, the bells of the town went wild for awhile. It was 11 am and every bell in every church (that means hundreds of bells) began to ring violently. I thought maybe carthagenians were swarming the beach. No one else seemed to notice. They rang for five or ten minutes. For an instant, they cut through the numbness and I felt the grief squeezing me, but I walked on and through it.

Even though it was only 11, I thought I might have a drink. One pub in particular, The English Inn, has traditionally catered to american students at Sant'Anna and their faculty. I was introduced to Fabio, the legendary owner, on my first night here. But I hadn't gone in yet on my own. First, because I wanted to be home in the evenings to keep in touch with Tab and my family over wifi. Second, because I feel strange drinking with my students and they are there every night. I wanted a bourbon. I've tried to eat and drink like an italian so far, but I wanted a bourbon or nothing. This early in the day, though, Fabio wasn't there and the woman on duty in the front of the house was not interested in me--families were eating and the dining room was hopping. I sat at the bar (truly, very like an English pub) by myself for a few minutes, then took my shopping bag and went out again.

Next door is a leather goods store where I have been admiring a leather bag since my first night here. I admired it again and, as usual, when I saw the shopkeeper coming to engage, I fled. On Corso Italia, I was thinking of how much easier it would be to keep my phrasebook and maps and sunglasses, etc., in such a bag. Only american men are afraid to carry such bags. We are still afraid of the schoolyard bullies who might call us sissies.

Then I started thinking about my mom's purses. Valises, really. My mom could never have owned one of those tiny sleek black purses stylish women wear. She might have considered putting twelve into the shopping bag she preferred. She could never find anything in her purse without first dumping it out. To read a menu at a restaurant, she would first fill the booth with pieces of folded paper, bottles of lotion, birthday cards, bags of food (and bits of food wrapped in napkins), used kleenex, kleenex packets, gum, cigarette lighters, paperback novels, spiral notebooks, oranges, pens, water bottles, and 40 other unidentifiable things before she could find her reading glasses and read the menu. And then order the same thing she always ordered. It always amused and embarrassed me that her key ring had an enormous stuffed yellow smiley face on it the size of a large hamburger bun. I first thought it was so she could see the keys in those chaotic bags. Now I think the smiley face acted as a sort of buoy--keeping the keys floating near the surface.

Now the tears were coming. I stepped into a narrow alley with no people (even narrow alleys are likely to be crowded in Sorrento) and turned my back to the street. I leaned against the wall and let it out just a little. If mom had been here, she would have 150 kleenex to offer me and I could have opened it up. But she's not, so I wept a little and then took a deep breath.

Me being alone and far away when she died is not what I feared. My friends and family support me even from the other side of the planet. Me not being one of the people holding her hand is what I could not bear. Probably, I'm lucky I was spared the awful sound and sight of her body's struggle. They will hear that sound in their dreams. But I wanted to share her life--every last bit of it--feel it in my hand. I wanted her to feel me with her, not hear my voice on the phone.

By now, I really needed some kleenex. I went back to Corso Italia and turned and climbed Via Sersale through the ancient gate of the city and back to my apartment. But first, I went back and bought the goddamned bag.

Remember that argument we had last week?