Although last week's vote was devastating for many of us, few can deny that the faculty spoke decisively in an election that had a higher turnout (95%) than any faculty election in recent memory. It may seem like cold comfort to union supporters, but I really do believe that we can be proud of the positive campaign we waged--in forums and on the listserv, we refused to make accusations, ascribe hidden motives, or question the character/abilities of our opponents. Instead, we tried to direct the conversation towards what a union could accomplish for faculty and for PSU, and to respond to questions/accusations (even when the answer was ignored and the question repeated many times).

In the last weeks of the campaign, the organizing committee assumed the attacks and accusations ("secret agendas," "retaliation" and the constant refrain that excluding contract faculty from the bargaining was somehow "dirty politics") of the most vocal anti-unionists would only resonate with those of like-mind and would either fall flat with undecided faculty or possibly even nudge a few in our direction (and, anecdotally, we did hear from three or four who were persuaded to vote YES in reaction to those tactics). In fact, we assumed that even responding to some of the most outlandish claims would make us seem as vehement (and thus irrational) as those most vocal opponents. However, if we lost as many supporters in the final weeks as it appears, we may have been wrong on both counts.
From the beginning, we certainly knew we would lose if we failed to convince our colleagues that a faculty union was right for PSU. Had the debate centered more on the merits, necessity and efficacy of unions, I suspect the loss would sit easier on many of us--we made our best case, they made their best case, faculty weighed both and decided. But that is where the takeaways from the election are unclear -- at least for me:
Forming a faculty union will not happen--at least not in the near-term. Rehashing what we might have done differently is useful, to a point, but only if we have the distance and perspective to question every assumption we made (and the assumptions we may be making in hindsight). That doesn't mean we can't work to make positive change, though. If we are up to it, perhaps our real challenge is finding a way to raise the level of discourse among faculty.
I had a long (and restorative) conversation with a friend who teaches at Eastern Kentucky last night. He pointed out that such tactics (even obviously fallacious tactics), and susceptibility to those tactics, are not only not rare in university discourse, but they are almost as much the norm here are as they are in the wider society.
The union discussion became mostly ugly. While I didn't exactly lose friends over it, I have less regard for a few than I once did. But attacking (or making insinuations about) the character of opponents isn't new behavior for PSU and we all share some of the blame. Every few years the faculty is called on to make some seemingly important decision: gen ed, four-credits, attendance policy, unionization.... Each time, in the midst of the more intelligent conversation, one faculty member or another rises to argue that they support position-X because they are compassionate towards students (and thus, those who hold any other position are NOT compassionate), or they oppose position-Y "because I, personally, enjoy teaching," (and thus, those who hold any other position do NOT enjoy teaching). When we simply move on to the next speaker and allow such manipulations to pass without remark we are complicit in what amounts to a discourse foul. When enough of those fouls pile up, we lose the ability to have real debate, much less dialectic (a concept that was, ironically, much invoked early in the union discussion, but mentioned more rarely when anti-union folks developed an offensive strategy).

If just one of us chooses to confront colleagues when 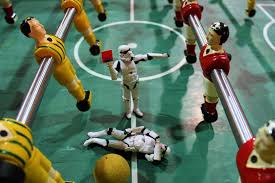 they commit such fouls, they will almost certainly be dismissed as a sort of crank. But if enough of us make it a point to call out fallacies when we see them...well, we'll probably still be ignored by many, but we may actually create a PSU culture that encourages more colleagues to argue the merit of ideas...and to question those who rely on emotional manipulation.

And in the end, maybe THAT's one way to improve faculty engagement in governance -- more people may be more willing to do more work on more ideas if they are less likely to have their character attacked in the process.