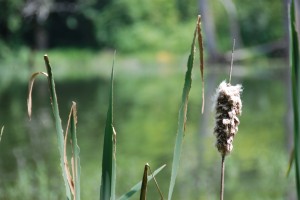 Chad and Andrew and Tommy loaded a camera worth more than all of my possessions into a flat-bottomed boat today so they could shoot and shoot and shoot from the water. John and Angela and Ian stood in the water to hold the boats steady and in position.

It was, finally, sunny. Brilliant. Perfect for shooting "day-for-night" with filters and low angles.

At lunch, Emily told the story of one of her mother's elderly patients who, on her very first visit to a hospital, complained to Emily's mother about the food in her hospital room. "There's something wrong with that Kentucky jelly. I tried some on a biscuit and it just tasted terrible."

The news crew canceled out of consideration for the scenes we were shooting today.

One of the interns, a great guy named Kenny, took my camera out in the canoe so I could have a shot of the four cast members out on the dock (in the "wish" scene). I was asked to back his car out of the way of the shot. I told him that if he didn't get my camera in the lake I wouldn't put his car in the lake.

All four of the actors nailed that scene.

Nick (as "Scott") howled as he threw the typewriter out into the lake. Angela and John retrieved it from the water. He threw it again and again.

Jen ("Tab") told me that she once owned a dog that would never come when it was called. Her mother named it "Godot."

Nick had to change clothes for the scene in which he is finally revealed to also be the "narrator". We stood on the dock and talked about his lines. He was covered in mud and I poured lake water on his head and down his back. When we were alone, he asked me what the lines meant, what I really wanted out of my brother. I told him.

Andrew called action and I poured another bowl of lake water on his head and leapt out of the shot. Nick shouted "Swim, Goddammit! Swim!." He screamed it out over the lake. He wept and howled and screamed it again and again and again.

When that was over, Chad and Andrew took a break as DP and Director and came over to sit in the beached canoe with me. You would have thought none of us already knew how this ends.

Also, Jen and I watched a finch landing on a cat tail at the lake's edge. It plucked a wisp from the ragged end and flew off to pad its nest. It kept coming back for more.

1 thought on “Night for Day”