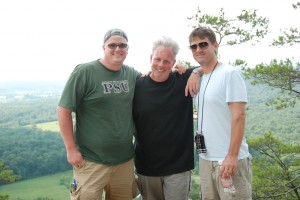 After a beautiful day shooting the hiking scenes at the pinnacles yesterday, today they shoot the lake scenes. The accident (they won't actually show it) is the first series of shots of the day. They are shooting "day for night" which means they darken it in post-production. Catchy phrase.

I'm uploading photos while they shoot those first several shots, then I'll head back to watch the dock scenes (in which "Scott" throws the typewriter off the dock, and the fantasy scene in which the four are reunited on the dock). At some point this morning, a TV news crew is coming. That will be weird. After the newspaper story last week, I'm a bit nervous about talking to a television reporter. I don't want to misspeak again.