Strange first day. Dozens of new faces and names and job titles and relationships. We shot two scenes in two hotel rooms (same hotel) today. One is the scene based on our actual night in Utah when Brian and Wendy slept in the same bed (but in the same room as Tab and I). The second scene  was based the hotel room where Tab and I stayed south of San Francisco while we waited for Brian and Wendy to come back from the city. I spent a good part of the day trying to be out of the way (though I do get credit for pointing out that the Wendy, Tab and Scott characters all needed wedding rings) and turning the ceiling fan on and off between shots. I am proud to say that at no point did an expensive and dangerous 5000 watt light come crashing to the ground because I had knocked it over trying to squeeze into the tight spaces.

Each scene was comprised of several shots--many of which required that the set be re-lit, the camera repositioned, and sometimes the furniture rearranged.

The  biggest surprise for me: at the end of the first scene that I described, Brian (Thomas) and Wendy (Jenna) are in one bed whispering. The script doesn't specify what they are saying, just that they are whispering. Scott (Nick) and Tab (Jen) are in the next bed. Scott turns and looks over at Brian and Wendy--in anxiety, jealousy, anger, fear, etc--just as Wendy can be seen to stroke Brian's hair. This scene is one that came out of the collaboration with Andrew and Chad and it is really telling. Andrew told Thomas and Jenna that it was not important for the audience to hear WHAT they were whispering, just that they WERE whispering. I should say here that these two have incredible chemistry: Thomas IS Brian--in tone, in sense of humor, even in some of his physical mannerisms. 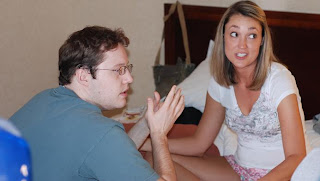 They shot a few takes while I squatted near one of the light stands (everything has a name in this business--I know none of them). In one shot, Jenna's whisper was very clear to the whole room. She said, "This was so unexpected. Thank you." Then she stroked his hair.

For a few seconds, I was in that other bed. All of the anger and jealousy and hurt (and the remorse for all of those things) squeezed me hard. It made me breathe quick. Then it let go.

They can't use that take. The audience can't hear her say that.

2 thoughts on “The more things change...”